This is what I’m reading

I write words and music. Books are: faerypunk THE PECULIAR (out now), its companion THE WHATNOT (out now), 1/4 of a spooky anthology THE CABINET OF CURIOSITIES (out now), and my YA debut A DROP OF NIGHT (Winter 2016), all from Greenwillow/HarperCollins. I'm repped by Sara Megibow at KT Literary.

This is my first book

This is my second book

This is my third book

This is my fourth book

This is my fifth book

These are my random ramblings

Cool things I have to tell you ’bout – I got ARCs for A Drop of Niiiiiight!

Anyway, is it not lovely? I love the red font. ARCs are the worst because you change things and correct things after the advance copies are printed, and regardless of whether or not they’re big things, it’s scary knowing people are reading something that’s no longer final. That being said, I WILL OVERCOME MY DISCOMFORT and give some away to you guys shortly, and just hope whoever wins doesn’t come across a typo or a terrible phrase repetition and be like:

Also, if you’re on Twitter you can keep an eye out for a giveaway there verrrrry soon.

Also-also, I’m going to go all self-promo-y for a second to say that you can pre-order A Drop of Night all over the place now, and Claire Legrand wrote a hilarious post about how pre-orders are in fact THE EXACT SAME THINGS AS UNICORNS (aka, very important) so if you are inclined to get the book, you would be awesome. 🙂

– Also: The German paperbacks of The Peculiar and The Whatnot just came out (October 28th, I think) and the artsy primary-color-covers have been replaced by the US images, and look how pretty. I will always like that bird on the cover of the first book. I remember staring it at for ages and memorizing every detail while in a state of slight shock. 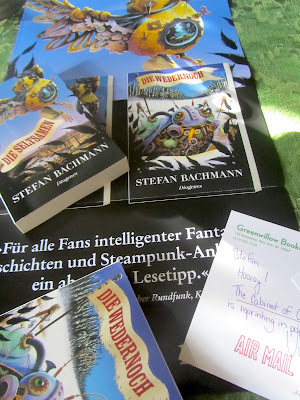 (I totally cross-posted this from Twitter, which is why the postcard is in the picture. So on that note, Cabinet reprinted again, yay, thank you, People Who Are Buying It! And speaking of Cabinet, we’re all super busy and so we’re on a hiatus from writing stories for The Cabinet of Curiosities, but we will probably be coming back to posting at some point when we’re not dying of the busy.)

Favorite art – Arthur Rackham for sure. His pictures are the best. Google him and you will be happy for precisely as long as you decide to look at his pictures. 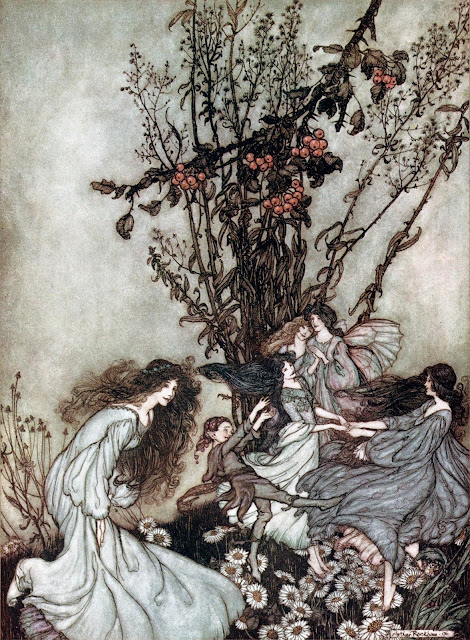 Random developments – I have to go military this December. I know, everybody’s like “Haaaaaaha?” and then like “Wait, you’re serious?”

Let me explain: I am not at all the military-going type. I’m terrified of guns and I have a deep loathing for orderly conduct, communal showers, and people screaming at you. That being said, I don’t actually have a choice in the matter, because as a Swiss citizen you’re obligated to do basic training, and while they have other options, they made sure to make them even more incredibly complicated and unpleasent than basic training. So, in December I have to do a bunch of tests, psychological and physical, and will then be shoved into some branch of the military, unless of course I have an untreatable illness, like leprosy. One can always hope.

I used to be kind of angry at the prospect, but now I’m like whatever, food for writing, which is pretty much my mantra now whenever something less-than-ideal happens.

Awkward thing happens at school: whatever…

Someone dies: food for…

I trip and break my ankle: …writing.

BECAUSE WHO EVEN CARES ABOUT ACTUAL LIFE when you have books to write, right? rite. 🙂

Future stuff – I’ll probably start posting video blogs on mah youtube channel in the future, because they’re quicker to make that written blogs (mostly because my editing skills are non existent and they just kind of happen how they happen.) I have a grand total of one video up from ages ago and that’s it, so this is my intention. It’s on my to-do list. I am determined.

That’s all I have. I hope everyone’s hale and happy, and having a great November. 🙂
Bye!

10 Comments to “Tidbits and Interestings #3”